All Collections
Organizations
Form Building & Editing
Can I make changes to a live Project after receiving submissions?

Can I make changes to a live Project after receiving submissions?

Important Information to know before making changes to a live Project.

Written by Ben Bloch
Updated over a week ago

We recommend making sure that your Project - and the forms used in it - are in their best and most final state before launching a Project and receiving submissions. Occasionally, however, you may need to make changes after you've already received submissions to your live Project.

As a general rule, adding something to a Form in a Project, or editing existing portions of a Form inside a Project (to fix a typo, for example), is not a problem. However, removing fields from a live Form can cause unwanted changes for submissions you've already received to that Project. You'll want to be sure this is going to be ok before removing anything from a Form in a live Project. This article explains what you should expect if you do have to make certain changes to a live Project.

Note: Any time you make changes to a live Project, you will see the following warning upon re-saving your Project. 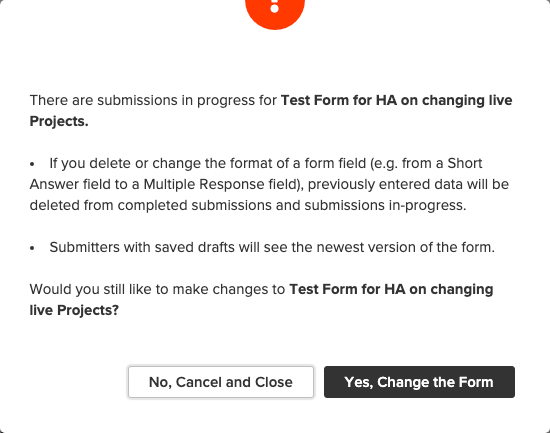 Click on any of the links below to view helpful information on making any of the following changes to a live Project.

Adding form fields to a form within your Project is generally okay to do. It can even be a useful workflow if you need some additional information from your initial submitters. After adding field(s) to a Form, those additions will update instantly in your live Project. You'll be able to open any previously received submissions for editing, and request those submitters complete the newly added fields.

After you contact previous submitters with a request to edit, they'll be able to open their submitted application and complete those new fields. The "n/a" response will change to recorded responses after this is done.

As with adding elements to a Form in a live Project, removing anything from a Form within a live Project will take effect immediately. Any form element you remove that was previously visible in a Form will no longer be visible on previously received submissions. With this in mind, you want to be careful about removing anything. Be sure to only remove questions or responses that you know will not be needed - this applies to all submissions already received, as well as for any submissions still to come. Be aware that anything you remove will remove it both from your organization view, as well as the submitter view.

Adjusting Branching in a live Project will immediately reflect whatever changes are made. If you add new fields to a branching structure, you can then open previous submissions for editing and allow those submitters to access the updated branch structure. If you un-branch form fields, but do not remove those questions from the form, they will still be viewable. If you remove/delete any form fields that are part branching structure, they will no longer be viewable for both past and incoming submissions.

You can add a new Table Field to a live form and it will be immediately available for applicants. If you open up previously received submissions for editing, those submitters will be able to access and complete the added table field. If you remove a table from an existing table field, and re-upload a new .xlsx file to the field, this will remove any information previously contained in the removed table. In general, you will not want to remove/replace existing table fields unless you are sure that you will not need any previously obtained data.

Currently, if the optional Terms of Use conditions (under General Settings tab) for a Project) is changed after a Project is live, only new submitters will see the change. Previous submitters will not be notified about any changes to the Terms of Use after they've submitted, nor will they see these changes if the submission is opened for editing at any point.